New Electricity – astonishingly cheap but variable power produced from solar and wind energy – will change the world in fundamental ways. Long-term investors need to understand the consequences of this.

Photo by Mike Enerio via Unsplash

For over a hundred years oil has been the “master commodity”. It was required to produce all other commodities, from agricultural goods to mined metals and minerals. The emergence of “New Electricity”- cheap power produced from renewable resources – upends this.

The root cause of the New Electricity revolution is precipitous cost declines in three key technologies: photovoltaic solar, wind power and lithium-ion batteries. Together this triumvirate is quietly transforming the way power is produced, and in future renewable energy will dominate power generation globally.

Not only will energy be increasingly generated from renewable resources, but in the coming decades more stuff will be powered by electricity. The electrification of transport is visible already through the emergence of electric vehicles; the electrification of heat may well be next.

New Electricity is not electricity as we currently know it. It is variable due to the nature of wind and solar production, but also malleable due to the emergence of new technologies for energy storage and digital management of supply and demand for power.

Here are five ways that New Electricity will change the world of long-term investments, as well as the economy and society at a broader level:

The sudden availability of cheap and clean power opens the possibility of whole sectors converting to electricity. Most obvious is transport and heat; internal combustion engines appear to be on a pathway to redundancy and in the coming decades it seems likely that houses and communities will be increasingly kept warm through electric heaters.

Less well understood is that food may be produced from electricity in future. Price decreases of Light Emitting Diodes (LEDs), which have mirrored those seen in core renewable technologies, raise the prospect of production of crops occurring indoors using targeted artificial light produced from clean energy. Such “controlled environmental agriculture” (a term representing a spectrum of technologies from the more basic such as polytunnels and greenhouses, to sophisticated of LED-powered “vertical farms”) has a number of benefits, in theory at least. Product quality can be guaranteed, waste and disease risk is minimised and, if production facilities are stacked vertically over multiple shelves, yields per hectare can be increased by orders of magnitude.

Abundant clean power is poised to change the way we feed the world in generations to come.

From an investment standpoint it used to be possible to evaluate a renewable energy asset in isolation. A wind farm with a government subsidy contract attached to it guaranteeing a fixed price for power effectively stands alone as an asset. As long as the wind blows and the government does not renege on its promises the investment produces reliable returns. A negative consequence of this is market distortions – assets may be sited in sub-optimal locations given the underlying wind or solar resource. Moving beyond subsidies means the elimination of such anomalies; projects are built where there is either abundant sun or wind and freely available land.

This new world of unsubsidised renewable energy works with a diverse array of components playing specific roles based on their individual attributes. It must therefore be viewed as an interconnected system.

Looking at Europe, for instance, the bulk of energy in future will come from solar in the sunny countries of the south and wind in the North and Scandinavia, with more niche technologies suited to local resources, such as tidal power in Scotland, playing supporting roles. These components will be linked together by an upgraded network of interconnector cables and backed up by energy storage technologies from batteries to pumped hydropower.

Investors need to understand this need for a systems-wide view. Take for example an investment into a solar power asset: the value of the output of the solar farm will be affected by the amount of solar built into the system: as more solar is added the value of each incremental unit will decrease because the whole solar fleet in the region produces power at the same time and depresses prices. This price cannibalization factor for each technology will be a key consideration in the energy sector.

Indeed, as the power sector becomes increasingly intertwined with other sectors such as transport, investors need to take an even wider systems view. The development of the Electric Vehicles (EV) and the mechanisms by which EVs both charge from the grid and act as a form of power back-up will have material consequences for the value of long-term energy infrastructure investments.

Climate plays an increasingly important role in long-term investments. This is apparent in physical risks, such as the exposure of real estate portfolios to sea level rises. It is also necessary to consider transition risks arising from the shifting of global society in response to climate change, manifest in everything from increasing public pressure to divest from carbon intensive investments to rapidly changing regulatory and legal environments.

For the first time since the industrial revolution society must look to the sky and consider what the climate may bring with respect to energy production. 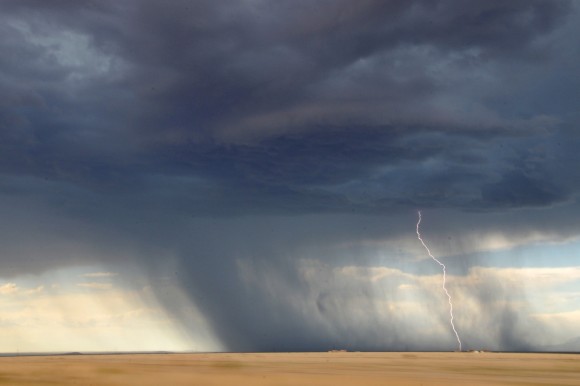 Photo by Lucy Chian on Unsplash

Thankfully core renewable technologies are inherently complementary. Sun and wind tend to have levels of negative correlation at different timescales, from within a given day to annual patterns. Advances in energy storage technology, transmission and distribution infrastructure, and the digital architecture underpinning the grid mean that that system will be able work even at deep levels of renewable energy penetration.

Investors should adopt conscious and long-term planning based on an understanding of the consequences of both short-term weather and long-term climate trends for asset portfolios.

As New Electricity develops there will be an expansion in technologies such as batteries to help keep the system in balance. But however much of this “flexibility” infrastructure is deployed, wind and solar power will become so cheap that there is likely to be a massive overbuild of these technologies, even if this means there will be times when surplus power is just dumped.

Consequently, at times electricity prices will be extremely low due or even negative due to excess renewable energy generation. This may occur in irregular circumstances, for example in the case of a windy night in the Northern European winter, when the offshore wind fleet is producing at maximum output, but intrinsic demand is very low. Such periods may occur on a regular basis with a high degree of certainty.

This presents an enormous value-creation opportunity for investors able to identify industry segments which may benefit from this variable abundance. Vertical farms may be an example of this; plants grown indoors can be bathed in light at any time of the day or night, or left for several hours in darkness, so power demand can be shaped to match the output of variable renewables. There will be other sectors that benefit from this cheap abundance, perhaps heavy manufacturing industries where output can be flexed, or specific applications like the production of ammonia, a crucial resource for agriculture. Indeed, there may be whole new sections of the economy which we have not even imagined yet which may emerge to benefit from this new abundance.

The rise of New Electricity changes the way we should think about the value of land itself.

First, the transition away from the fossil fuel era upends the geopolitical energy order that was established in the second half of the twentieth century. This order skewed wealth towards countries which had won the great hydrocarbon geological lottery. And because the production of oil as a useful product can only take place at a large scale – even if you were lucky enough to have an oil well in your backyard you would be unlikely to build an onsite extraction and refining facility – it reinforced the positions of mega-corporations.  Renewable energy is inherently more distributed and more democratic. If a country has sun, wind or water resources, it can now power itself, and with some rooftop solar and a battery in their basement a family can achieve a degree of energy independence.

At a nation-level this enhances energy security; for countries with moderate land areas either wind or solar, depending on the location, can supply an increasing share of local generation. But, until renewables are superseded with future energy sources such as nuclear fusion, availability of land continues to be what economists call a “fixed production factor”. The importance of this is that the fixed production factor will capture any surplus value in a value chain.

To be viable without subsidies wind and solar power often need to be built at substantial scale, which necessitates the availability of large amounts of land scarcely populated areas. The Atacama Desert in Chile, Southern California and the interior of Spain, blessed with bountiful sunshine, are examples of land areas where the solar revolution may increase land values; wind may do the same in the snowy regions of northern Scandinavia, as well as Texas and western China. 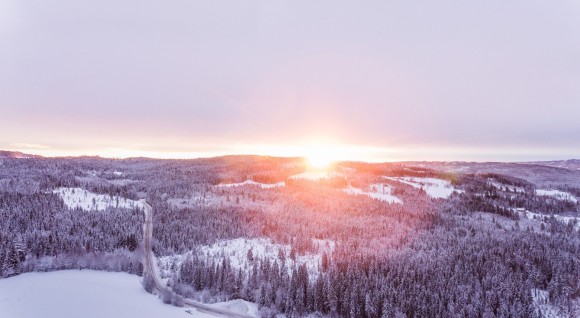 Photo by invisiblepower via Pexels

More subtle changes are underway too. With the advent of controlled environment agriculture, New Electricity in particular, becomes a particularly important consideration. The $200m Sundrop Farm, which supplies 10-15% of Australia’s truss tomatoes, uses an integrated renewable energy system to provide heat, electricity, water and nutrients. As challengers to traditional open field agriculture arise, access to cheap energy will increasingly be a crucial competitive advantage. Proximity to a renewable energy source, therefore, may be a valuable asset. The extremely high yields per land footprint of vertical farms, meanwhile, means that production facilities can be established in urban areas. London’s Growing Underground development, sited in Second World War air raid shelter’s under  Clapham Common, is an example of a business model predicated on the premise that closeness to the end customer is a competitive edge.

Because of the substantially enhanced yields per hectare of controlled environment agriculture, it may be that large areas of land currently given over to food production could be restored to natural habitats such as forests, used for recreational purposes or renewable energy production. All of these changes of use have important implications for how that land is valued.

While the exact consequences in terms of land values that New Electricity will have are hard to project, what is clear is that land itself will continue to be a key driver of value, just as it has been throughout human history. But the drivers of that value in future will be very different to those in the past.

The coming domination of renewable energy will change the world in what initially may seem subtle ways, but in the medium and long-term the effects will be profound. New Electricity is permeating the global economy, but it only works because of an interconnected system where generating power plants work in conjunction with “flexible” assets such as battery storage, and everything is held together by the glue of a complex emergent digital network. Agile investors will be able to capture the valuation creation opportunities presented by an abundance of cheap variable power; but the continued linkage to weather means that even in the twenty first century climate patterns will need to be considered in a manner familiar to our agrarian predecessor societies. The confluence of controlled environment agriculture and New Electricity allows a democratization of production (resource production is less tied to areas which happen to have the right ecological or geological resources), and this in turn will shift the way land itself is valued.

This is a text widget, which allows you to add text or HTML to your sidebar. You can use them to display text, links, images, HTML, or a combination of these. Edit them in the Widget section of the Customizer.